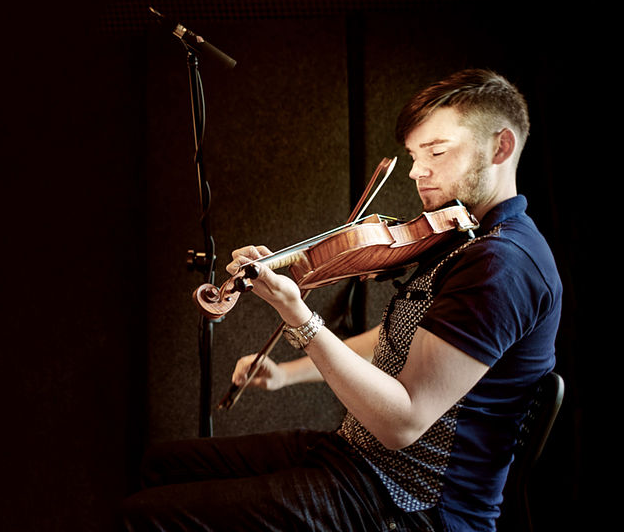 Aidan Connolly was born and reared in Rathfarnham in Dublin and has been playing the fiddle since the age of eight. Aidan absorbed much of the music of Sliabh Luachra through his mother Eileen Moynihan, a Co. Kerry native. From taking classes at the Craobh Naithí branch of CCÉ and from playing with his mother and uncle, Con Moynihan, also a fiddle player, Aidan quickly developed into a fine musician and began to be influenced by the recordings of fiddle masters Paddy Cronin, Paddy Canny and many others.

Part of a generation rich in traditional music talent, Aidan encountered several like-minded peers at music festivals throughout Ireland and this had (and continues to have) a big impact on his playing.

We are delighted to bring you The Portland Bow, the debut solo album by Dublin fiddler Aidan Connolly. The material featured on the album combines an eclectic mix of both popular and lesser-heard traditional repertoire as well as a number of tunes that Aidan learned while living in Spain. Traditional repertoire from Scotland and Cape Breton also makes an appearance, and fans of Aidan’s music will be pleased to hear that the Sliabh Luachra tradition, with which he is closely associated, remains a prominent focus throughout the album.

Both physical and digital formats available.

Background information, credits and sample tracks available when you view the albums in the Online Shop

Launch of ‘Be Off’ at Cooley-Collins Festival, Gort, Co. Galway